Recently, I received an email from Barbara from Barbara Cooks (http://www.barbaracooks.com/) asking if the bloggers of San Diego might be interested in receiving a box of items from Melissa’s Produce (http://www.melissas.com/).  The “Challenge” was to take what was delivered to you and create a delicious recipe.  First, I love getting things shipped to me.  I feel like it’s Christmas!  Second, no surprise, I love food.  Third, I love playing around with food to create something new.  Fourth, I love knowing that a bunch of people out there have the same ingredients and will come up with very different recipes.

I’ve heard of Melissa’s Produce, but I didn’t know much about the company, which the owners, Joe and Sharon Hernandez, named after their daughter.  It’s basically an online grocery store for very unique items.  There’s everything from organic fruit baskets to organic blue agave syrup to Pinot Noir and Chestnut basket.  Can’t find Armenian cucumbers at your grocery store or Farmers’ Market?  Just go to Melissa’s Produce.  There are a ton of recipes online created by their five Corporate Chefs.  Say you bought quinoa at your grocery store and you don’t know how to cook it, or maybe you’ve cooked it a million times and you need a fresh idea for dinner.  Just type in “quinoa” on the website’s recipe search engine, and several recipes are at your fingertips.  Maybe Muscato Cashew Quinoa will strike your fancy.  My only question, are you hiring, Melissa’s Produce???

I must admit that this service is pricey.  Here’s what I received: Fava Beans (shelled, steamed, and ready to eat, 8.8 ounces), Baby Beets (peeled, steamed, and ready to eat, 8 ounces), Brussel Sprouts (10 ounces), Leeks (cleaned and sliced, 6 ounces), Red Quinoa (6 ounces), Dried Chanterelle (.5 ounces), Baby Dutch Yellow Potatoes (1.5 pounds), and Ojai Pixie Tangerines (1 pound).  I received smaller quantities than if I were to have ordered the items myself.  I estimate the total amount for the portions I received to be around $40.  For certain items, overnight shipping is required, so you can add almost $20 for the FedEx delivery.  Everything I received was in perfect condition and tasted great. 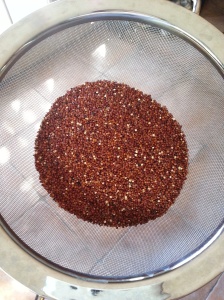 My mom was visiting from Cleveland, Ohio when the shipment arrived.  She was excited to see what was in the box and what I’d make with it.  A few days after I received the box, I just started sautéing things.  My Mom asked what my plan was, and I honestly wasn’t certain.  It just kind of came together.  We were talking, and I’d roast Brussels Spouts.  We’d talk more, and I chopped Fava Beans.  We’d talk some more, and I sautéed leeks and cook quinoa.  Next thing I knew, I created  Quinoa Stuffed Chicken with a Spicy Soy Orange Glaze and, as I call it, Mish Mosh Potato Salad.

My finished product! This was one tasty potato salad!

For the potato salad, I halved the Baby Dutch Yellow Potatoes and put them, sliced side down, onto a baking sheet lined with parchment.  I covered the sheet with foil and put them into the oven at around 400 degrees.  Once the potatoes were soft, I removed the foil, flipped those bad Dutch Babies over and continued cooking them in the oven until they were nicely browned.  I roasted the Brussel Sprouts in the oven at around 400 degrees, as well, until they were browned and softened slightly.  Once I removed them from the oven, I did a rough chop on those lovely mini cabbages.  I placed the potatoes and Brussel Sprouts in a large bowl and added the Red Beets which I roughly chopped, as well.  I took walnut oil and balsamic vinegar, whisked it until it emulsified, and added it to the potato salad.  I usually do a ratio of one part vinegar to two parts oil, but I must admit I don’t really measure.  I added a little salt and pepper, too, and that was it!

The final product for the main course!

Like I mentioned earlier, this was a “do whatever I felt like” kind of cooking day.  I love sautéing leeks and garlic, so that’s where I started.  First, I sautéed the leeks in olive oil over medium to medium high heat until the softened and were golden, probably around 6 minutes.  I added a few garlic cloves I had chopped and continued cooking for about a minute.  I added about 2 ounces of white wine (mainly because I felt like a glass of wine while I was cooking), and I raised the heat and cooked for a few minutes.  Right about then, the house smelled amazing.  I had cooked the quinoa in chicken stock earlier, so I added the leek mixture to the quinoa.  Earlier, I had also reconstituted the Chanterelles. I simply boil water, add the mushrooms, turn off the heat, leave the lid on, and let them sit for 30 minutes or until they have softened.  I rinse the mushrooms very well after.  I chopped the Chanterelles and the Fava Beans, and I added them to the quinoa mixture.  I added some ground pepper and salt, to taste.  The amount of quinoa filling was enough for 8-10 chicken breasts.  I didn’t realize just how much it would make, but I love leftovers!

I pounded the chicken and put as much filling as I could in each breast, approximately 1/2 a cup of filling for each.  I folded the chicken breast so that the filling remained inside, and I tied the chicken with kitchen twine.  I put the stuffed chicken into a baking dish coated with olive oil, covered, into the oven (around 375 degrees) for about an hour, or until it reached 165 degrees internally.

While the chicken cooked, I threw together a few items I had on hand for a sauce.  In a bowl, I whisked together orange juice (about 1/2 cup), soy sauce (about 4 tablespoons), agave (4 Tablespoons), white vinegar (2 healthy Tablespoons), and a couple of Tablespoons of chile paste.  If you like it really spicy or not very, this amount can be catered to your taste.  After whisking to combine, I placed the mixture into a pan and brought it to a boil while continuing to whisk.  Once it reached a boil, I reduced the temperature and I let it simmer for about 10 minutes.  It will reduce slightly and thicken.  I added the chicken breasts to the pan and continued cooking at a medium heat while basting the chicken with the sauce.  At this point, the chicken is cooked, I just wanted to really infuse the chicken with the flavors of the sauce.  I got the idea of doing an orange juice based sauce because of the tangerines in the shipment.  I decided to simply eat the tangerines as a dessert.  It was a perfect meal, if I do say so myself!

I can’t wait to read what other local bloggers created!  What a fun idea!  A huge “Thank You” goes out to Barbara and Melissa’s Produce!

Here is the link to see all of the Bloggers who participated: An InLinkz Link-up