OK, so my title is a little misleading. Let me start at the beginning. Melissa’s (http://www.melissas.com/) offered another challenge to the San Diego Food Bloggers. The timing was a little tough due to the craziness of the Holidays, and Melissa’s pushed our creativity to the next level. We had to use all of the ingredients and create two recipes: one savory and one sweet. I was on board. I can’t thank Melissa’s enough for giving us the opportunity once again. I received my complimentary box of goodies containing a one pound bag of Mandarin oranges, two Korean pears, bag of Baby Dutch Potatoes, steamed chestnuts, steamed baby potatoes, steamed beets, peeled and steamed baby potatoes, seedless grapes, and a cookbook all about Baby Dutch Potatoes. 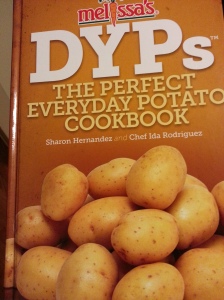 I gave myself a few days to figure out the direction I wanted to go with all of the items. I browsed the cookbook I received. I had some ideas, and then my wallet was stolen. Aargh. I am still talking with different companies and the police, so my creativity took a little hit. I felt like grabbing a burrito at La Posta (http://www.yelp.com/biz/la-posta-de-acapulcos-san-diego-2) and a growler from Societe Brewing Company (http://societebrewing.com/) instead of cooking and writing.

I started with dessert. I needed something sweet! I decided to make a Korean Pear and Grape Pie. I had eaten a Korean Pear before, but I had no idea how it would bake. This is where the “Don’t Try This At Home” comes into play. The pie tasted really good, but it looked like a wet mess. So sad. Korean Pears are unbelievably juicy. Maybe that was where I went wrong. Maybe I needed to add more flour to the fruit mix, or maybe I should have sautéed the pears to extract some of the liquid? Let me know your thoughts! The produce was delicious, and the pie was really tasty, it just should have held together better.  I wish I had more time to try this again, but time was short.  I’m making sure to put “Time” on my wish list to Santa!

I opted for a contemporary Christmas tree vent. 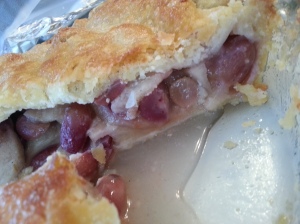 It was even more watery. I had to drain it a bit.

Once I made my sweet tooth happy, I, shockingly, was in a way better mood to cook! With the remaining ingredients I created an entrée and a side dish that is so easy to make any night of the week. I usually am not a fan of chestnuts, but I LOVE them in this recipe. And I love beets, but they can kind of be a pain if you buy them fresh. I felt like I was cheating by having the beets peeled and steamed for me! No grabbing surgical gloves to avoid the red stained hands! Awesome!

Seared Five-Spice Chicken with Chestnuts, Beets, and Spinach Roasting on the Open Fire (Well, not really, but I was listening to Christmas music while cooking, so it just sounds right.)

Ginger Baby Mash Potatoes (No red-heads were harmed in the making of this recipe.)

I love these Baby Dutch Yellow Potatoes.  The roast so nicely!  I received the same potatoes from Melissa’s during the last challenge, and I couldn’t resist preparing them the same way, but I had to mix it up a little! 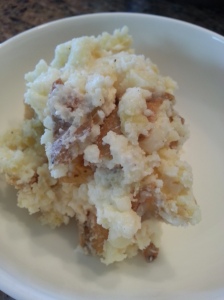 This was another fun challenge, and I can’t thank Melissa’s enough for the ingredients provided.  Even though I received free stuff, all opinions are all mine!  I can’t wait to see what other Food Bloggers created with these items!  And I look forward to using the cookbook, but that might have to wait until after Christmas!

In case I can’t write again before the Holidays, I hope everyone has a fun, safe, and memorable eating experiences!  Looking forward to writing many more posts in 2015!